How Alex Trebek’s Suits Are Making A Difference 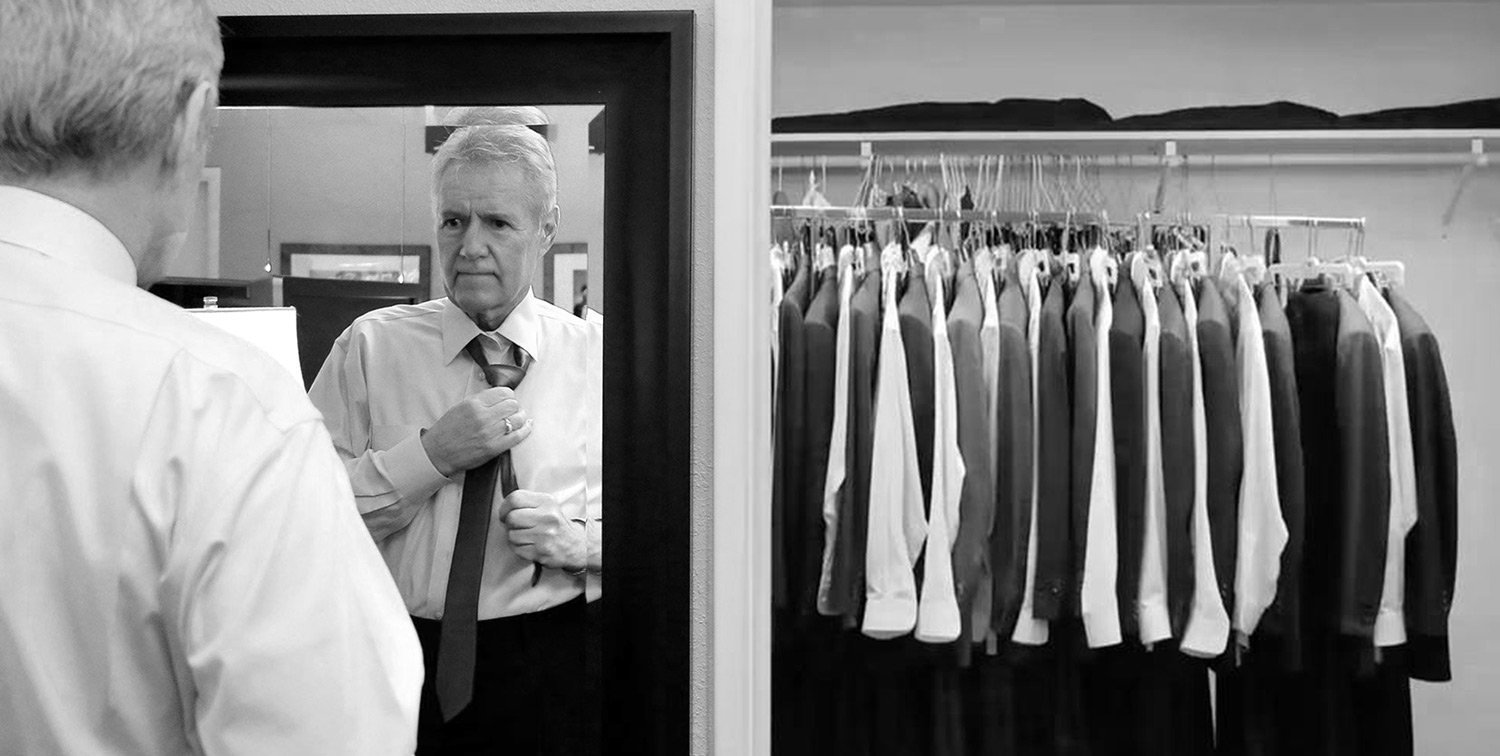 Matthew Trebek and Julie Androshick, Vice President of Development at The Doe Fund, met at St. Matthew’s Baptist Church in Harlem. “His staff from OSO were cooking for and serving homeless people on a regular basis. I was so inspired by this, and the fact that Matt was so open to becoming involved with our program—especially with our annual Dishes by Doe culinary event.”

Julie, who assisted in coordinating the donation of Alex Trebek’s suits to The Doe Fund’s Ready, Willing & Able program, joined the team a few years ago at the request of its founders, George and Harriet McDonald. Julie has been instrumental in her role in managing fundraising efforts for the organization. “As a New Yorker, I was proud to become part of a program like this–visionary with real impact on the individuals it serves. I am inspired by both George and Harriet’s unflinching commitment to providing opportunity to tens of thousands of men, something they’ve done for over 30 years!”

“We have an incredibly loyal base of individual, corporate, and foundation donors,” Julie continues, “and we meet new ones each day who see how essential and transformative Ready, Willing & Able is and who want to become engaged. Of course, I consider Matthew Trebek to be one of our most committed supporters.”

It’s “something I knew my dad would be totally onboard with.”

My business partner, Nodar Mosiashvili and I operate Oso and Lucille’s, two restaurants located in Harlem, NY. Because of that, it’s been great getting to know some community members. I was introduced to Inez Dickens who is an Assembly person for the Harlem area and is involved with the Martin Luther King Democratic Club.

During one Thanksgiving holiday, I attended a turkey giveaway that the Martin Luther King Democratic Club had organized and, at that event, I was introduced to The Doe Fund. Some of The Doe Fund members were there volunteering and it was obvious to me that these men were really dedicated to assisting others who needed a helping hand.

A few years later, I started running a “soup kitchen” out of St. Matthew’s Baptist church called Lucille’s Family Meal. Julie Androshick from The Doe Fund would stop by to visit and we became friends. Julie kept me abreast of all the events and opportunities that The Doe Fund facilitated; I was and still am inspired by this truly life-changing organization.

What I really appreciate about The Doe Fund is that it gives people an opportunity for a new beginning. There are so many ways you can help someone get back on their feet, and who of us hasn’t needed a second chance? One day I was approached by Rocky Schmidt, Producer and long time, dear friend of my dad Alex Trebek, as to what I would like to do with all of my dad’s suits at the Jeopardy! Studio. I immediately thought of the Doe Fund. Jeopardy! Costumer, Steven Zimbelman, and Matthew Trebek in his dad’s dressing room at the Jeopardy! studios in Los Angeles preparing the shipment of Alex Trebek’s wardrobe to The Doe Fund in NYC.

Their flagship mission, “Ready Willing and Able” was something I knew my dad would be totally onboard with. We live in a world where dressing appropriately can make a difference in how one feels about themselves and how one is perceived. Even though I know that it’s not all about what someone wears, there is something to be said for feeling a bit better about yourself when you have pride in your attire. My hope is that the confidence someone might feel in wearing one of my dad’s suits and ties will help them land a job, and more importantly, will help them realize that they are not alone. Photo courtesy of The Doe Fund.

“Matt, Jean and Rocky! We are thrilled that our men received these gorgeous and heartfelt donated clothes!”—The Doe Fund

Alex Trebek’s suits will not just allow others to look good, but to feel good about themselves and regain confidence.

Harriet McDonald, President of The Doe Fund, said upon learning of the organized effort to donate Alex Trebek’s suits to their Ready, Willing & Able program, “The generous donation of these stylish suits will help the men we serve, who are often uncomfortable and unfamiliar with promoting themselves as part of an interview process, regain their confidence.They will not just look, but truly feel the part of a responsible employee, a taxpayer, a role model to their community, and a contributing and present father to their children.” “When we said that the only thing the people we serve needed to succeed was opportunity, everyone thought we were insane.”

“A big part of our workforce development program,” Harriet continues, “revolves around interview prep and workplace etiquette; professional attire plays an important role in both. And of course, these suits save our men the expense of having to purchase their own. Suffice to say, we are extremely grateful for your generosity!” The men of the Ready, Willing & Able program have been playing an important role in the frontline defense against the spread of Covid-19 in New York City.

“I am moved daily by the resilience of these men, who overcome enormous challenges and setbacks to become not only self-sufficient, but to rejoin their communities and families.”

“Although many stories inspire me, one stands out: A few years ago, I was partnering with a 59-year-old man who had been incarcerated for most of his adult life. It was the first time he was preparing for a job interview and he was just so fundamentally moved by the fact that it is never ever too late for anything! He gained the confidence and skills he needed to move on to a full time job in the food industry.”

“The Doe Fund has always believed that environment influences attitude. The same is true for clothing,” says co-founder and President Harriet McDonald. “When the Men in Blue first began cleaning city streets, we made sure to put them in bright blue uniforms with the American flag on the sleeve. We did this because we wanted them to feel like they were part of something bigger than themselves. We wanted to rekindle their self-worth and help them recognize their inherent dignity and value. After all, who doesn’t love a man in uniform?”

Supervising Producer and long time friend, Rocky Schmidt, said on behalf of the Jeopardy! crew, “Alex was a huge proponent of helping people get a second chance at a happy, successful life. The work of the Doe Fund does exactly that, and the team at Jeopardy! is happy and proud that we can support those efforts.” The Trebek family is highlighting and bringing attention to The Compassion Project—a program that beautifully interweaves education and kindness. Caregiving For Parents Requires Self-Care Too

Caregiving for a parent or any family member can be challenging. It’s important to remember to also take care of yourself during the process. Matthew Trebek and his business partner, Nodar Mosiashivili, are serving up kindness and hospitality to people living in poverty or transitional housing in North Harlem.